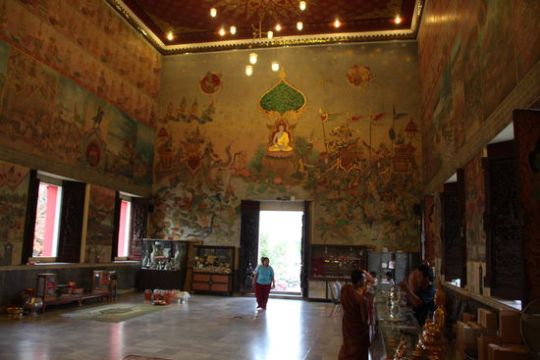 This is the second day of the Song Kra in Nong Khai.

Woke up this morning at 7 a.m. fresh and celebrating my Tzolkin Galactic Birthday.

I was drawn once more to visit the Wat Meechai and stayed in the Temple there for awhile as I felt the stirring of the vortex energy flow.

From there I followed the Kaeworawut Road and got splashed by water twice. It is rather an odd experience the first time it happens. The next Wat I visited was Jamanee along this road. The energy here for me personally was lower than the other Wat and I stayed not very long here. I noticed there were many young monks here. 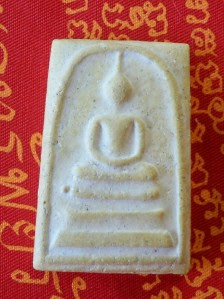 I went further by bicycle to Wat Jaan Samakki with its beautiful garden. A very peaceful place to visit. Unfortunately, due to Song Kra the temples were closed but certainly could feel the resonance here. It has four sides of entrance. Some of the entrances are being restored. 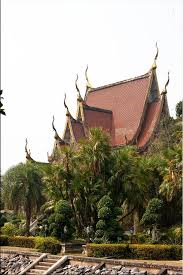 There is also a lovely sitting area near the garden.

I rang the bell three times.

There were also two parade cars on the premises.

You could also stay the night here as well.

I was getting thirsty and was close to the coffee shop with bakery at the Nong Khai library to have a nice cup of Green Tee with Lime and a piece of cake personally baked by the owner. The lady is friendly and speaks perfect English. On Sunday, she bakes a fresh bread so I will treat myself to this.

After this I went further by bicycle to Prajak Road to visit the Village Weaver Handicrafts store. Talking to the lady she relayed that there is no longer a weaving factory in Nong Khai. There are a couple of ladies who still weave small articles now across the street from there. I bought a small gift of a purse for tooth picks that they had woven to support these ladies.

By that open space, it was already 12:00 a.m. and I decided to go back to Mut Mee Guest House. First took off my wet clothes and had a shower. Than inner guidance called to sit down and paint

“When the Earth is shaken shivering in its roots that is when the Ancient Waters surrenders to the Spiral Movement.

Like DNA and Kundalini resonance Or is it the Stream of its nurturing Nature?

May the fiery flames be enlightened to enter the Sacred Temple of long ago but not forgotten.

May the breath of the Lotus bloom its fragrance for All in this splendorous Love Light.”

A coming home to be in a new start of transcendence connection with source to be in the Natural flow of Insight in the Cosmic Order uplifted by the Kundalini or DNA spiral movement of Instinct to follow the Body Wisdom.

As we are challenged, strengthened and in the open opportunity of Magical Playfulness of innocence, spontaneity and weaving new patterns to awaken to the initiation of the attracted creation of universal consciousness and universal love.

In the presence of now affirmation:

The gift of this cosmic identity is to be an emissary of the primal source of life ~ a holder of ancient memory ~ a fluid synthesis of elemental forces – earth, air, fire, water ~ an agent of oneness. As a Red Dragon vibration all have the capacity to be a dynamic, multi-faceted cauldron of creation; to be a portal of vast potential and ever-present new beginnings; to be an initiator; to honor and commune with the supreme, spacious dimension of pure beingness that precedes all doing and striving; to be holistically nurturing and all-embracing of the many spheres of your life; to rest in primal trust that the universe is always conspiring on your behalf!

“Established in being, perform action.”

Gratitude Blessings to All.