Continuation of Review of Journey in Slovenia – June 8

This morning the Crystals and Crystal Skulls called to come with me for this journey.

We were met by the guide from “To Do in Slovenia”, Vladimir Aka Fossil, at 08:30 at the Central Hotel in Ljubljana. We than went to pick up the other group members in Ljubljana at their Hotels. The group consisted of 2 ladies from Japan, 1 lady from Calgary, Alberta, Canada and 2 ladies and a gentleman from British Columbia, Canada. Quite an international together where English was mostly spoken.

The guide Vladimir had many legends and stories to tell on the way to “Postojna” especially about the old culture and how the grandmother(s) was the head of the family but also of small villages. She shares her stories and knowledge with the family (children, grandchildren) plus also with others. Also, old recipes are shared and written down in a notebook. Sundays are special when the family comes together and share a meal that the grandmother has cooked or one of the members of the family. How in the villages this still exists such as trading products or services with each other without the use of money systems such as banks etc. (Synchronicity here as well with the Tzolkin Mayan Calendar of this day and evening – Imix, Red Dragon (Ancient Mother (Gaia/Pachamama, Grandmother/Mothers with the Higher Self or Highest Good together with Guidance – Caban, Red Earth (navigation/synchronicity).

One of the examples Vladimir shared was if there is one person in the village that has a tractor instead of every (small) farm having one. The One tractor that may be needed at that moment by someone is than shared and traded with products or service (hours) that is needed such as taking care of a home/garden whilst someone is away etc. A family house in the village is build floor by floor (have heard this from other cultures as well such as Egypt, Croatia, Turkey etc.). The grandparents live on the first floor, next floor are the children of the grandparents, next floor the children of the children etc. The house is not sold but is kept in the family.

Along with this Vladimir told of the history of Slovenia, various explanations about the pronunciation of names and the backgrounds of the names. Also, how Slovenia was influenced by wars and various other countries that had taken over.

He also had a great sense of humor with his philosophic jokes. The moment we stepped into the van he kept his stories going until we came to the cave or castle. Certainly, the group had fun along the way. (Love how this synchronised with the Tzolkin Day Energy of challenging, strengthening and open space of Chuen, Blue Monkey).

The country side we drove along was so serene and with such graceful beauty of Mother Nature – the trees, the hills, the villages and gardens of the homes still mostly in a pure state. I felt very peaceful, respectful and in harmony with these surroundings. You also see many wild flowers and herbs growing along the way and these are certainly still used for cooking, making liquor, wine or beer, medicinal purpose and I saw etheric oils plus soaps that are made from this as well. Honey is one of the main local products, olive oils, truffles and mushrooms. There is of course more than this that the local people grow such as their own vegetables and especially potatoes, goat cheese etc.

Personal note: I had packed a small lunch (goat cheese, homemade bread plus red and green paprika which came in very handy seeing there was not much space in between to have lunch. 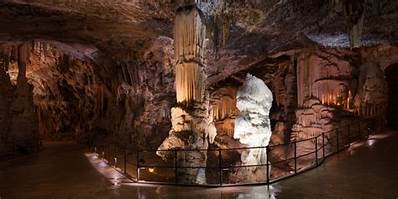 The network of cave passages in Predjama is more than 14 km in length; it covers the area both under and behind the castle, as well as a hidden passageway that leads from the castle into the open. Although the cave is a branched and long one, only the 700-metre long section closest to the entrance is open for regular visitor tours. The 700 meters accessible to visitors encompass the Stable, the Main Passage, the Passage of Names, the Great Hall and Fiženca, where the exit to the surface is located.

Postojna Cave was carved by the Pivka River over millions of years. There are stalagmites, stalactites, and formations called curtains or draperies that look like folded curtains.

The cave system is 24.12 kilometers (14.99 mi) long and is made up of four caves interconnected through the same underground river. However, according to speleology rules, the passages and siphons connecting the caves must be walked or swum through by man for them to be considered one whole. Connecting two of the main cave systems will make this the longest cave system in Slovenia and one of the longest in all of Europe. There remain 400 meters (1,300 ft) between the two caves, which would make the cave system between 31,000 meters (102,000 ft) and 35,000 meters (115,000 ft) long.

The cave was first described in the 17th century by the pioneer of study of karst phenomena, Johann Weikhard von Valvasor, although graffiti inside dated to 1213 indicates a much longer history of use. In 1818, when the cave was being prepared for a visit by Francis I, the first Emperor of the Austria-Hungary, a new area of the cave was discovered accidentally by local Luka Cec. In the 1850s, the Austrian-Czech geographer Adolf Schmidl published the first comprehensive scientific overview of the Postojna caves and the Pivka Basin, which became a standard reference point in the study of speleology. 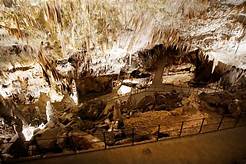 Personal note: the guided tour inside the cave consists of train ride plus walking through the caves of limestone (white, red and green) and at the end a train ride again. It felt very mystical to be there and at any moment I was expecting Merlin the magician/wizard or other elementals. Beautiful how each stone was like a sculpture of beauty. I could see various creatures in the sculptures and smiling faces. It brought back memories of Lemuria and Atlantis culture. Could feel that the crystals and crystal skulls were enjoying the journey as well. 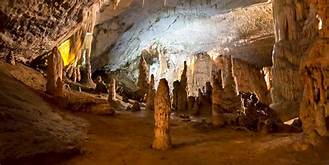 It had always been a wish to go to a cave and this certainly was an amazing experience of gratitude. I am not one of taking photographs so I found some images via Google images to share some expressions of the cave. Thank you to those that have made the effort to share these photographs with everyone. 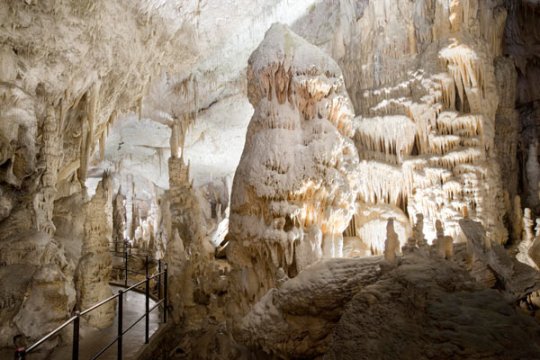 The caves are also home to the endemic olm, the largest troglodytic amphibian in the world. The tour through the caves includes an aquarium with some olms in it. On January 30, 2016, a female olm at the cave began to lay over 50 eggs. This rare event led to global news about Postojna Cave and the olm. From the end of May to mid-July 2016, twenty-two baby olms successfully hatched. Karst topography refers to a plateau in southwestern Slovenia and northeastern Italy, which gave the name to karst topography. 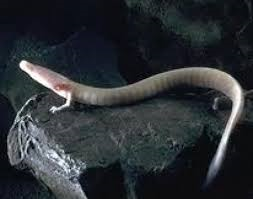 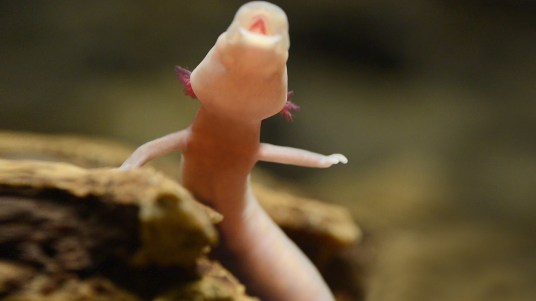 Water from karst springs is important for the water supply; drinking water from karst aquifers supplies one-fourth of the world and half of Slovenia’s population. The vulnerability of caves is high due to the nature of water drainage in karst areas and its limited self-cleaning capacity. Surface pollutants like pesticides, heavy metals, and fertilizers, which seep into subterranean waters, pose a great danger to cave-dwelling animals, including the olm, for which prolonged exposure to pollution may prove fatal. The olm’s natural habitats are therefore part of the European Natura 2000 Network.

The next stop was Predjama Castle

The castle was first mentioned in the year 1274 with the German name Luegg, when the Patriach of Aquileia built the castle in Gothic style. The castle was built under a natural rocky arch high in the stone wall to make access to it difficult. It was later acquired and expanded by the Luegg noble family, also known as the Knights of Adelsberg (the German name of Postojna).

A vertical natural shaft leads out of the original castle, which Erazem ordered to be enlarged, and leads to the exit located at the top of the cliff, 25 meters away from the cliff’s edge. This shaft allowed Erazem to secretly supply the castle with food in the time of the siege; he also used it to continue with his robberies.

Predjama Castle was used as the castle featured in the 1986 movie Armour of God by Harvest starring Jackie Chan, Alan Tam, Rosamund Kwan and Lola Former. It was also investigated for paranormal activity in a 2008 episode of Ghost Hunters International on Sci Fi Channel. It was also the filming location of Laibach’s Sympathy for The Devil cover’s music video.

Personal note: Guidance assisted here to not take an audio guide with me at the ticket office. By the entrance hall it felt okay to connect but as soon as I started to enter a chamber here I was urged to leave this Castle. Later Vladimir, the guide of the tour for today, came towards me and asked what my experience was. He told me more of the history and what all went on amongst people and energy field there. It certainly answered my question why I was urged to leave the Castle. There were still much negative or dark energies still existing here. My sensibility was in an alert state as I felt certain pulls around me. Thank you, guidance and Vladimir for the clarity in this.

The energy of the surroundings of Nature assisted here to be in balance again.

End of the Tour

We than drove back to Ljubljana as a group and from there went our own way. We all thanked Vladimir for his presence and sharing’s.

Personal Note: I than first went to the food festival market which is every Friday in the center of the city. Nice fragrances and aromatics flowed here. A happy to see and feel how people come together to enjoy each other company and the food that is gifted.

I than decided to visit the Ljubljana Castle which is also on top of a hill in the center of the city. Once more I had the same experience to leave here as soon as possible. It became even more clearer to me that these still carry old programs and systems that no longer serve the Pure Heart Love of Multiuniversal Grace and the Grace of the Crystal Core of Earth.

The final activity for this day was to go on a boat ride over the Ljubljanica River for about 45 minutes. Quite relaxing to spend the rounding of this day in circle.

Review of Journey in Slovenia – June 7

Continuation of Journey in Slovenia – June 9, 2018