The Legend of the Moon Boy

A long time ago there was a clever boy whose name was Cuoi. He did nothing with his cleverness but played tricks on people around him, especially his uncle and aunt who he lived with.

One day Cuoi came to the field and broke the bad news to the uncle that his wife had fallen down from the ladder and was hurt. The man was so frightened for his wife that he got up and ran to his home. Cuoi, however, took a short cut and reached the house before his poor uncle. He then told his aunt that her husband had been gored by a buffalo and had died. The poor woman dropped everything and ran out to the field. On the way, the two distraught husband and wife bumped into each other, each sweating and panting from all their running. The couple decided to punish Cuoi by putting him inside a bamboo cage and setting it adrift on the river.

Many years later, Cuoi married a girl in the village but he did not change. He kept on playing tricks on people. One morning he went into the forest and saw a tiger mother plucking leaves from a tree to cure her cub’s wound. Cuoi took the opportunity to uproot the tree and re-planted it in the garden behind his house. He called the tree “Banyan” and took good care of it. He always reminded his wife that the tree was magic so she should never pour dirty water or place garbage at its roots otherwise it would fly to the heavens. His poor wife became jealous of the tree that Cuoi took such good care of and one day, she dumped garbage at the root of the tree.

When Cuoi came home he found the tree shaking and rising higher and higher in the sky. He tried to hold on to its roots to pull it back down but he could not. The tree actually pulled him up farther and farther from the earth until it reached the moon.

It is said that if you look up at the moon, there is still an image of Cuoi sitting at the root of the banyan tree and looking down on the world. There is also a Vietnamese expression: “to lie like Cuoi”. 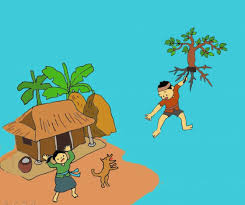 The Insight of Ceremony

Story of the Betel Leaf and the Areca Nut