Our (daughter, grandson and myself) started at Schiphol Airport, The Netherlands at 17:30 to Reykjavik, Iceland eta 18:40 local time and transferred from their to Toronto, Ontario, Canada eta 22:25 local time with Iceland Air.

It always gives me a feeling of amazement landing on another planet when we are at Reykjavik, Iceland. It is so barren yet plants and bushes can be seen. The airport size is small but very efficient. The stopover is short and an open space to be able to stretch your legs and move around a bit.

Onwards in a comfortable airplane of Icelandair for another 5 hours. We all slept shortly or watched a movie. Grandson enjoyed himself watching the soccer match of Ajax, The Netherlands. Along with this it is also exciting when your favorite club wins the match.

Arriving at Toronto Airport Meredith (niece) and Ron (nephew) where there to greet us. Felt deeply from the heart that it is a good choice to go abroad to keep up the family ties especially for all generations (this is also the vibrations of the Tzolkin calendar EB, Yellow Human. The happiness of such pleasurable joy to embrace these two beautiful souls (Meredith and Ron) is beyond words in its expression, to intertwine with them brought forward such colours of radiant Love. How empowered family ties evolve in a mutual understanding of compassion and acceptance.

From the airport it was only a 15 minutes drive to Meredith’s and Ron’s home in Mississauga. Once again that feeling of being home with family (lived in Canada for 10 years in the past) resonated in its fulness of One.

Maverik, the dog of Meredith and Ron

We all sat outside at their swimming pool area with a temperature of 25 degrees Celsius to have a good conversation and some healthy snacks of pineapple, walnuts, fresh cherry tomatoes from their garden and some lovely herbal tea. How simple and easy can it be to continue with the weaving of this family garment! An eternal bond that balances the equalizer of each individual soul qualities in the collective in its creation that once more strengthens this communicative vibration on so many levels.

Personally it touched me deeply in the heart to be able to give and receive this journey of exploration in Present open space. This anchorage and grounding of Canada and its splendor of opportunities of growth and development for so many immigrants to expand and create a home for the family and welcome for others. Such a comfortable bed to sleep in with an pleasant dream to go along with it rounded off so gently this night cycle in Mississauga.

History of Go Home Lake, Ontario, Canada
Go Home Lake is a lake in west central Ontario in the Township of Georgian Bay, District of Muskoka. Go Home Lake is a natural lake which is actually part of the Musquash River system also spelled as Musquosh River on some maps.

It was opened up as a recreational lake starting in the late 1950s when Crown Lands were surveyed, subdivided and auctioned off in Public Bids that took place from 1958 through 1962. In the early 60’s the construction of two dams was completed, a permanent earthen dam at the Go Home River outlet and a stop log dam (control dam) at the Musquash River outlet. The intent of the dams was to control the water level to maintain a constant water level throughout the boating season eliminating the seasonal fluctuations in the water level.

There is actually two stories about how the Lake was named, one is It was named after Go Home Bay, immediately downstream. Loggers would send timber down the Musquash River and meet steamers at Go Home Bay, which would transfer timber to various mills around the Great Lakes and then “go home”, hence the name.

The other story dates further back to when the Voyageurs travelled down Georgian Bay from the French River and met the Indians that lived along the shore of Georgian Bay at the mouth of the Go Home River (Go Home Bay). The Indians would pack up each fall and move inland to the area of Go Home Lake which was more protected, to live out the winter months. When asked where they were going by the Voyageurs, they would reply Kewa, which meant “Go Home” in their native language, hence the name for both the Bay on Georgian Bay, the river and the Lake.

Go Home Lake is approximately 5 miles (8 km) long and ranges from 1/2 to 3/4 miles (800 – 1,200 m) wide. Of Muskoka’s 1600 lakes, it is the 14th biggest by size. Its length runs in a north-south orientation. The lake is fed at its most northern point by the Musquash River. It then empties back into the Musquash River through a control dam at the south end of the lake, and into Go Home River at the north end of the lake. Both the Musquash and Go Home Rivers empty into Georgian Bay. 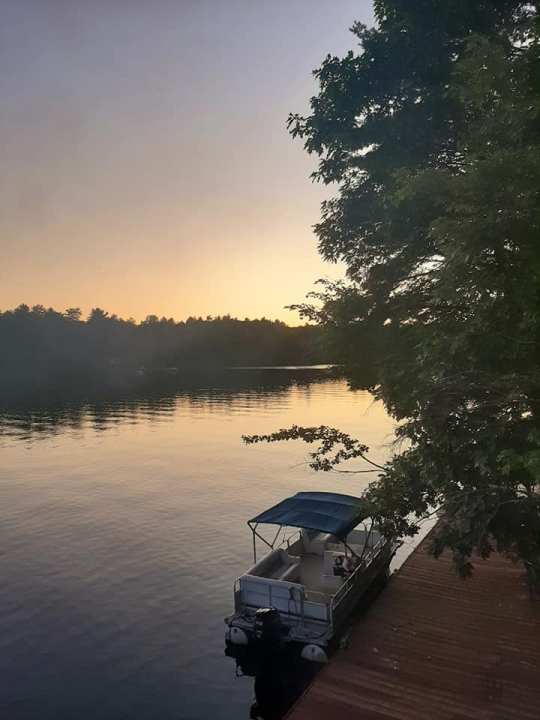 Go Home Lake is considerably more rugged and rockier than other Muskoka lakes. Both the “New Cut” (a man made channel), and the “Haunted Narrows” link the south end of the lake to the north. The “Haunted Narrows” received its name from the eerie sound caused by the movement of rocks on the bottom of the channel that can be heard in the dead of night due to the strong current flow.

There are approximately 430 cottages on Go Home Lake, the vast majority of which are water-access, as well as two marinas. The closest marina to the Hwy. 400 exit is Minor’s Bay marina, which is built upon the location originally called ‘Potter’s Landing’ in the 1950s. The further marina from the Hwy. 400 exit is Go Home Lake Marina. While both marinas offer dockage, parking, boat launching, only Go Home Lake Marina has a general store with refueling facilities to cottagers. Minor’s Bay marina also has a public telephone, as well as marine mechanical services.

The Go Home fire tower once stood on the NW side of the lake overlooking Go Home Bay. It was one of the last manned towers used in Southern Ontario and came under the jurisdiction of the Parry Sound Fire District in the early 1970s when the Ministry of Natural Resources was once called the Dept. of Lands and Forests.

Recreational activities are popular on this lake, including: fishing, canoeing, cliff-diving, water-skiing, wakeboarding, tubing as well as the annual regatta.

Now to further the review, this morning we were treated with a great breakfast prepared by Meredith and Ron in their home in Mississauga. These two are very conscious of organic food and the environment we all live in.

On our way we stopped at “Good Foods” grocery store. I was amazed at all the varieties of fresh organic food, supplements, ready made salades and warm meals to choose from. In all my travels I have never seen such a broad variety before.

Today we all went travelling to Go Home Lake, including Maverick of course, to stay at the family home that Ron’s parents (origin from Germany) build in the 1970’s. It took them ten years to build it. It was build with a double brick wall which is most unusual for the surrounding homes. 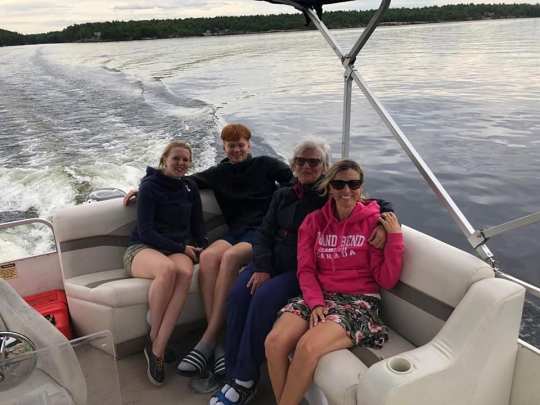 To travel to the home you park your car and then go onwards by boot. Beforehand Meredith and Ron had packed various food, drinks in the coolers plus all our luggage as well. We certainly were very well spoiled and taken care of. Deepest Gratitude. 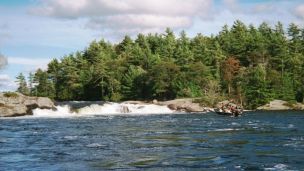 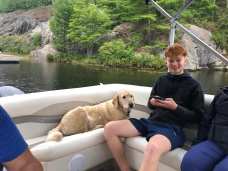 We all shared our adventures and great moments in our lives. In the afternoon some of us went into the hot tube and went on a boot ride plus swimming in the lake. A bit cold when you first plunge in but certainly refreshing once you were adjusted.

Grandson had his first try of waterskiing and succeeded the second time around. What an achievement! The next door neighbour and his son (about grandson’s age)offered this seeing they had a powerful motorboot. Grandson thoroughly enjoyed this sport and how everyone complimented him on his achievement.

We all had a great lunch (hamburgers and salad) specially barbequed by Ron. A special vegetarian burger for me as well, so tasty, very grateful for this meal.

I myself had a little nap whilst daughter and Meredith plus Maverick went into the lake swimming and into the hot tub. In the meanwhile grandson and Ron (great coach and nephew) went on a bike ride exploring the surroundings. 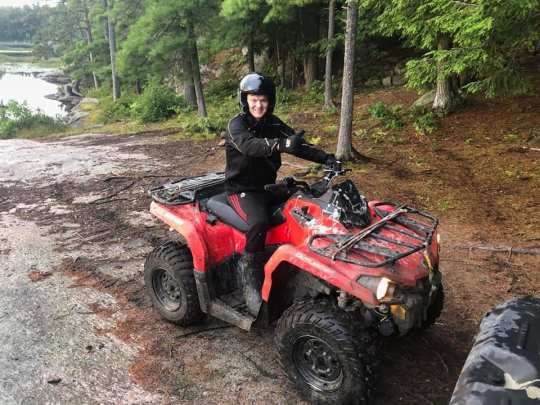 We all had a healthy supper with wine and beer enjoying each other company plus playing a game. Great fun! A good night sleep as well. With a great sunset.

A great breakfast of pancakes with maple syrup. Something that is so yummy that you need to wipe your face in between as well.

We all went kayaking to align with the beauty of Mother Nature. Saw some waterfalls but at the moment the water in the lake was low. Along with this also the turtles, various flowers and an heron (Meredith made a joke about this some more family members greeting us as well). We all had a good laugh about this. 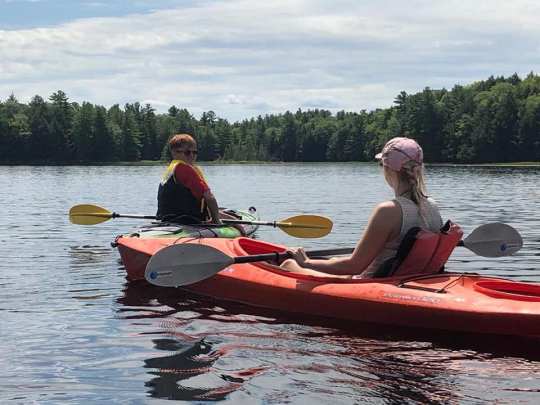 Daughter and grandson enjoying one of their favorite sports. 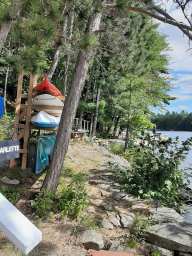 Ron doing most of the rowing here but thoroughly enjoying it.

We all had a great lunch and dinner together. We went for a boot ride to explore more of the surroundings before dinner. Unfortunately it started to rain so we had to head back. Grandson was this time the captain who brought us around. Ron assisted where needed with the grace of a trusting coaching. I could see that grandson’s confidence was growing inch by inch.

In the evening everyone enjoyed playing pool in the special room in the Home. By that time I was fast asleep.

The next morning, August 16, 2019 – Meredith, daughter, grandson and I headed back to Toronto Airport to pickup the rented car to travel to London, Ontario to the rest of the family. Meredith went home to work in her office.