Archive for the ‘Dr. Cabrera’ Category

Wednesday, June 7 – Journey within the Sacred Grounds of Peru

The city of Ica is the capital of the Ica Region in southern  Peru. While the area was long inhabited by varying cultures of indigenous peoples, the Spanish conquistador Gerónimo Luis de Cabrera claimed its founding in 1563. As of 2005, it had an estimated population of over 219,856. The city suffered extensive damage and loss of life during the 2007 Peru earthquake.

We arrived at the Dr. Cabrera’s museum. Seeing we were with a group of 20 people the lady attendant called Dr. Cabrera’s son to guide us through the tour in the museum.  The son was very touched by his father’s discoveries and had a long story to tell. See further hereunder about the stones. It relates to the energy flow of the day that to have a vision and relate to reality it can be created. There is some doubt about the findings and whilst the son was telling the story of his father you could feel some question marks arising in the story told. The son was also looking for funds to move the stones to another location in case another earthquake would come.

We than went onwards by bus to the location of the Huacachina Oase. Quite a difference in energy fields. It was a curiosity resonance that excited us into a Joy of Playfulness. Whilst driving we could see various sand board surfers on the Dunes. After setting our luggage into the rooms we went out to do a ceremony together lead by Arthur and Pieter. One of the members of the group was asked to envision his truth via a small river reflection of himself.

The ride in the Dune Buggy really shanked things up inside myself. On the way we stopped by a Dune so that members could go dune sand board surfing. By that time I was totally disoriented and dizzy so I did not join into the fun of the surfing.

We stopped at another area to do a ceremony during the Sunset. Two of the group members were initiated into the Universal Mother Ship with the Alien Light Beings. A beautiful sunset with the upcoming Moon guided this journey.

At the end of this Dune buggy ride we sat down in silence to watch the Huacachina Oasis down below. By that time I was really nauseated and feeling not so good. This went on when we arrived at the Oasis. Later in a silent meditation sitting on the terrace in the Oasis I remember a life time that I had here. It was like a connection with the journey I had made along the Nile River in Egypt. Some cleansing and clearing occurred in deep gratitude.  I placed in the morning a Clear Quartz Crystal in the ground.

White Wave 2 – the Inner Shaman of Magic of Timelessness

KIN 15 – Blue Lunar Eagle of the Crystal Rabbit Moon of Cooperation, light code 15:2:9 Crystal Moon of Cooperation to stabilize the polarisation of the challenge. Be honest to recognize your limitations to overcome them and to embrace them. By creating a Vision of Higher Consciousness. 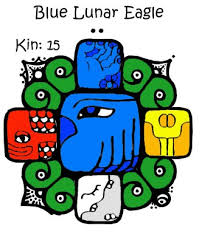 Tone 2 is to be honest in recognizing your limitations and to overcome them and embrace them.

Be honest in recognising your limitations to overcome and embrace them as you flow in the resonance of the natural supportive spiral movement of the East with its seeding into the fertile ground of growth and development. Allow and surrender to the patterning of love light.

As we move onwards into the Wisdom of the North with the step by step accomplishment opening to fulfillment, healing and beauty with the divination of the Sacred Dance. Be committed with focused attention.

From the West, the spiral moves so that we All can face the challenge, strengthening and opportunity of using our body and alignment to higher consciousness. Integrate and purify the kundalini energy flow.

To move into the spiral of the hidden power of the South within its whilst transmuting to forgiveness and compassion being in balance with the revelation.

Now in presence center, ground and anchor this open space of the Vision of the Condor and the Eagle of compassionate service to the Universal Consciousness. Believing in the Heart Love Light Essence to bring dreams and visions into realization.

A private museum that displays over 11,000 engraved stones showing amazing representations that will leave you breathless. The great collection reveals images of our universe, the earth, plants and human beings co-existing with animals that roamed the planet millions of years ago. On these stones visitors can see various types of dinosaurs, maps of old and modern continents, people using telescopes looking at the stars and performing surgery. According to Dr. Cabrera, the man who dedicated his life to the investigation of the Stones of Ica, the scenes reveal a different world with an extremely advanced technological civilization. According to Dr. Cabrera the stones of Ica represent a sort of library of a remote human society that would have left testimony of their presence on our planet and high degree of their achievements.

The Ica stones are a collection of andesite stones found in Inca Province, Peru that bear a variety of diagrams. Some of them supposedly have depictions of dinosaurs, and what is alleged to be advanced technology. These are recognised as modern curiosities or hoaxes.

From the 1960s Javier Cabrera Darquea collected and popularized the stones, obtaining many of them from a farmer named Basilio Uschuya. Uschuya, after claiming them to be real ancient artifacts, admitted to creating the carvings he had sold and said he produced a patina by baking the stone in cow dung.

According to legend, a hunter caught a beautiful Incan princess walking in the sand dunes near present day Huacachina. As she walked and admired herself in a mirror she was carrying, her eyes caught his voyeuristic gaze. Shocked, the princess began to flee and dropped her mirror. It exploded into shards and the glass became a tiny pool in the desert, consuming the princess and turning her into a mermaid.

Known as the “Oasis of America” it is one of the only true desert oases in the Americas. A lush island in a sea of sand, its watery pool