Archive for the ‘Luxor Temple’ Category

A daily Review of a Gratitude Journey through Egypt – Sunday, September 25, 2016

A wonderful breakfast was served on board the cruise boot. I was placed on a table of 8 people – 2 Belgium couples plus 1 couple from Holland and Frank.

At 10 a.m. there was a briefing with the guide Ahmed who explained various options of excursions plus extra activities. He improvised a bit with the program plus added a few things as alternatives so that this could be a journey of relaxation and impressions. It was certainly more than I was informed about. Quite excited and open for this adventure of 7 days.

After a great warm lunch, we went to Luxor Temple with the group to the “Theban (this is the Ancient name for Egypt) Triad:

Amon, Mut and Khonsu. Amon was originally one of the gods in the ogdoad of Hermopolis but received shortly before the Middle Kingdom more and more influence in Theban, probably because his cult in the First Intermediate Period was adopted by powerful local rulers. After the expulsion of the Hyksos (circa 1567 BC) raised the rulers of the Eighteenth Dynasty Amon to victorious national god. Karnak was his main cult center in Egypt. As the “Hidden” (whose name in hieroglyphs was accompanied by a blank space instead of an explanatory sign) Amon was with other deities’ incarnations as Amun-Re (the supreme Creator), Amon-Min (the “bull who served the cows ” with an everlasting erection) or Auf-Ra with the ram’s head (incarnated Re”). The last sailed through the underworld to revive the souls of the dead and was reborn as Chepri.

Amon usually appears as a man with ram’s horn and the Atef crown with double feathers.

His wife, Mut, was in the pre-dynastic time a local goddess associated with Nechbet, the vulture-protectress of Upper Egypt. Early in the eighteenth dynasty she was “married” to Amun, they took the place of his earlier wife Amoenet and she was Mistress of Heaven.

She is usually depicted with vulture and uraeus and the double crown of the Two Realms.

The son of Amun and Mut, Khonsu, “the Traveler” crossed the night sky as the moon god, he offered predictions and assisted Thoth, the divine scriber. He was depicted with a hawk’s head or as a young boy. Karnak was the largest temple dedicated to the Theban Triad.

(picture of the Temple complex)

The Luxor temple is on the rim of the city center. With its stately colonnades and pylons, which are lit up until 10 p.m. in the evening, it creates a stunning view from the river and the Midan el-Haggag. If you visit during the day to explore the temple, you can easily see all the details, but it is worth to come back again after sunset, when the atmosphere is calm so you can soak this in.

This is an image of how Luxor Temple would have been.

Karnak is the work of many dynasties, but the Luxor Temple was built mostly by two rulers, when the art of the New Kingdom reached its peak. It was founded by Amenhotep III (1417-137 or 1390-1352 v. C) of the eighteenth dynasty, also responsible for the third pylon at Karnak and the Colossi of Memnon across the river. The work was still continued under his son Achnaton (who blotted out the cartouches of his father and next to it build a sanctuary for Aton), but later this was resumed under Tutankhamon and Horemheb, who decorated the courtyard and colonnade with their reliefs. To this Ramses II (1304 or 1279-1213 BC) of the nineteenth dynasty added a courtyard with a double colonnade and a pylon with obelisks and colossi. Despite later additions and rebuilding under Alexander the Great, the temple is a coherent whole. When the French army saw the temple for the first time in 1799, the soldiers presented spontaneously their guns in honor of the Temple. 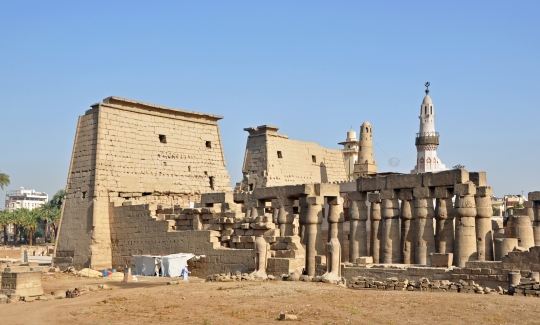 That the reliefs are still so clear is because the temple was buried for centuries under sand and silt and the city was built on top of it. In the 19th century exceeded travelers in Luxor saw a “maze” of mud construction work. When the French wanted to take away an obelisk and archaeologists wanted to excavate the temple, they had to pay compensation for the demolition of numerous homes. In recent years there has been a drainage system constructed against the rising groundwater, which is causing much damage to the temple. Surrounding buildings were demolished in order to show more of the avenue of sphinxes to Karnak and to ensure an unobstructed view of the temple.

On the temple grounds you will first see an avenue of sphinxes with a human face. This avenue in earlier days went all the way to Karnak. Today still more and more exposed parts of this avenue can be seen. Behind the Serapis Chapel, that was built by the Roman Emperor Hadrian on his birthday in 126 n. C. inaugurated, it provides a mound to the height of the medieval city of Luxor that was built on top of the temple.

The real genuine gateway to the temple is flanked by pylons and colossi. There is a 25-meter-high obelisk that is adorned with reliefs and was originally covered with white gold. The second obelisk was transferred to France in 1835 and stands on the Place de la Concorde. The four baboons with dog heads at the foot of each obelisk had huge erections this has been cut off by prudish French. Behind are three of the six colossi of Ramses II, who stood before the pylon (four sitting, two standing). Figures on the thrones have a construction of a bodybuilder and they wear double crowns. The thrones are decorated with reliefs of the Nile god that connects the two realms together.

Thepylon is 65 meters wide and was once 24 meters high. There are notches for flagpoles and scenes of the alleged victory of Ramses to the Hittites at Kadesh. You can also see how Ramses in the Egyptian camp consult the commanders before he attacks his enemies while awaiting reinforcements. Nubian and Ethiopian Kings centuries later also left their mark here. Note the relief of pharaoh Sjabaka who had a race run for Amun-Min, that is high on the left as you walk through the pylon.

Behind the pylon lies the courtyard of Ramses II, surrounded by a double row of papyrus columns that once bore a roof. The courtyard is skewed relative to the axis, probably to integrate the older bark shrines of Thutmose III, who were dedicated to Khonsu, Amon and Mut. On the opposite colonnade stands the Mosque of Abu el-Hagag. This Fatimid building bears the name of Luxor’s patron. The townspeople did not give permission for demolition when the temple was excavated. In the mosque you see Islamic motifs and Pharaonic hieroglyphs. The prayer room is carved into a pillar of the temple. Outside prayer times should non-Muslims inside. Ask the top of the stairs from the Midan el-Haggag. 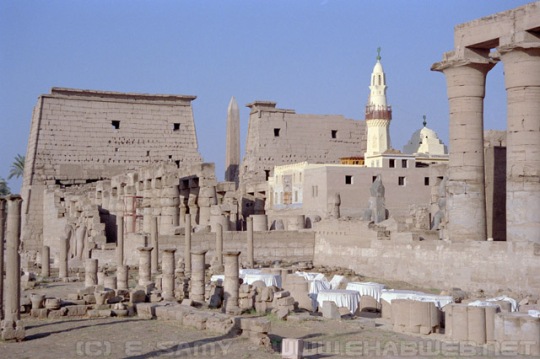 In the temple you see on the bottom half of a frieze how the procession of the temple Amon approaches during Optetfestival, in which the god offered lettuce as a symbol of fertility. Ramses sacrifices for Mut and Montu (the Theban god of war) under the watchful eye of his queen and seventeen of the hundred sons he fathered in ninety years. 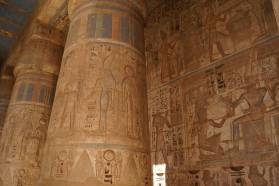 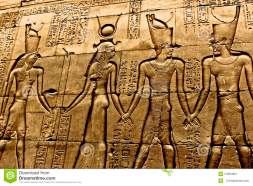 The entrance is flanked by black granite statues of Ramses. The pedestals are decorated with pictures of prisoners from Nubia and Asia. Behind this is the relaxing older part of the temple, with the imposing colonnade of Amenhotep III and a processional avenue with huge papyrus columns which still architraves. On the walls you can see more scenes of Optetfestival, you should read this counterclockwise. After offerings to the boats in Karnak, the procession of Amon went to Luxor Temple. He returns 24 days later at Karnak. The illustrated pharaoh Tutankhamun, who let decorate the colonnade be decorated, but the cartouches honor his successor, Horemheb. 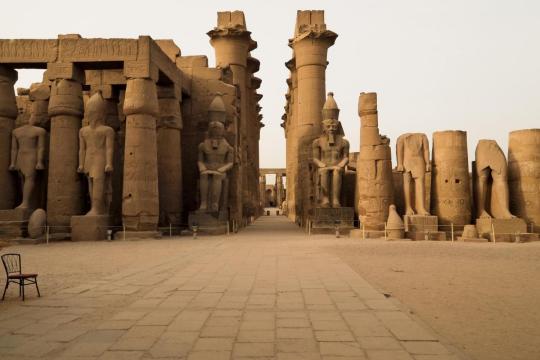 At the end of the colonnade is the courtyard of Amenhotep III, with colonnaded of papyrus columns. The southern colonnade turns into a pillar hall with 32 papyrus columns, which serves as a portal to the real temple. Between the last two columns left of center is a Roman altar dedicated to Emperor Constantine, before he was converted to Christianity.

The guide, Ahmed (a university archeologist) was clearly able to explain the details of this Temple. Something I remember clearly what he said was about Ramses II and his great love and adoration for his wife “Nefertari”. It reflected to me personally that this is a significance of an equal relationship (life or soul partners).

Once upon the grounds I could feel inside a stirring of remembrance that this Temple has certainly a reminder to All that Oneness is of Peace and acceptance of each other beliefs as today we are still drawn to compare and judge each other even to the state of going into violence or aggression about it.

After the Luxor Temple we all went by pairs by horse carriage through local areas of Luxor, beyond the usual center passageway, to the train station and other local streets and straight through a huge Egyptian local market.

The children and adults waved from windows in their home or along the street. They enjoyed the strange visitors but were enthusiastic and in joy. For me I felt a bit strange to be sitting in a carriage as a higher citizen and waving to the people at the same time it also felt like connecting, honoring and respecting this country and the people who live there.

Our driver Ahmoud seemed to sense what was going on inside of me and explained that the people are very happy that tourists are coming again in Egypt. It gives them hope for the here and now and the future of everyone.

After returning to the boot we all had a welcoming drink and a warm washing cloth which was offered to us. One of the ladies from the group complained about her neck and I gave her an energy treatment. She felt relieved and responded that it felt warm, calm, peaceful and she felt a tingling going through her body.

It reminded me to share more with others when asked for.

We all had dinner and relaxed on the top deck. I love to drink the thee here.

Gratitude and Blessings to All.