Archive for the ‘Ramses II’ Category

Thursday, September 29, 2016 Review of a Gratitude Journey through Egypt along the Nile.

Thursday, September 29 – Review of a Gratitude Journey through Egypt along the Nile

We were all called at 3 a.m. this morning with a breakfast package to travel in a convoy of busses to Abu Simbel Temple.

Above is a link presentation of the Temple.

While the pyramids of Giza are perhaps the most recognizable artifacts of the ancient Egyptian world, following closely behind are the Abu Simbel temples in Southern Egypt, commissioned over 3,000 years ago by Pharaoh Ramses II.

The Temples at Abu Simbel are located in Southern Egypt, at the second cataract of the Nile, close to the Sudanese border. Ramses II chose the site because it was already sacred to Hathor, goddess of motherhood, joy and love. This act strengthened his divinity in the eyes of the ancient Egyptians. It encouraged them to believe that he, too, was a god.

The history of the Abu Simbel temples begins with the twenty-year effort to build these impressive structures, along with four other rock temples built in Nubia during the reign of Ramses II. The construction of Abu Simbel started around 1244 BC and was finished around 1224 BC.

Many scholars believe that the two temples of Abu Simbel were an act of ego, pride and love on the side of Ramses II. He ordered these temples built to: 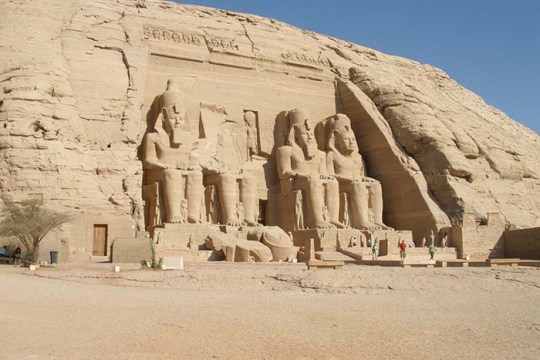 The entrance to the large temple of Abu Simbel is crowned by a carving of Ramses worshiping the falcon-headed god Re-Horakhty, usually referred to simply as Ra. Flanking the entrance are four seated colossal figures, each a towering 20 meters (65 feet) tall. Each of these large figures is a depiction of Ramses II, seated on his thrown, wearing his double crown. Around the figure’s knees there are small carvings of some of his wives and children. Beneath the colossi there are smaller figures that depict Ramses II and his conquered enemies including the Libyans, the Nubians and the Hittites. There are other statues that represent Ramses II’s family members as well as gods of protection.

Inside, the temple has a triangular layout, with rooms decreasing in size as one progresses into the temple; the rooms are filled with engravings of Ramses II and his beloved wife, Nefertari, paying homage to the gods.

The interior begins with an atrium consisting of eight pillars. One these pillars, Ramses II is depicted in disguise as the god Osiris. Hieroglyphs and images in this atrium depict in grand detail the king’s victory at the Battle of Kadesh.

Beyond the first atrium, a second atrium opens with four pillars decorated with images showing Ramses II embracing various gods. Beyond the second atrium is the inner sanctuary where statues of Ra, Amun, Ptah and Ramses II are all seated. 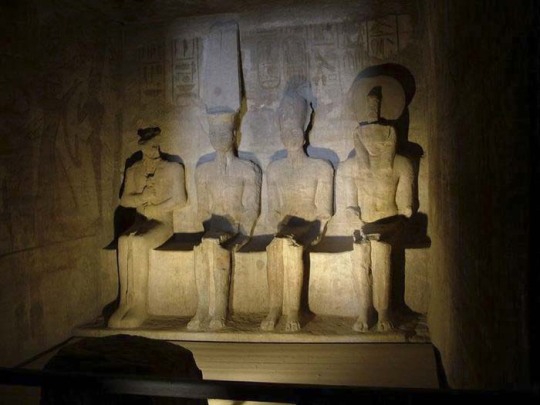 The Great Temple was constructed keeping in mind the position of the sun on February 22 and October 22. On these days, sunlight penetrates 55 meters (180 feet) into the inner sanctuary to illuminate the statues along the back wall. Only Ptah, the god of the Underworld, remains in darkness all year round. Why those specific dates were chosen remains a mystery and some believe they might represent Ramses II’s birthday or his coronation.

The Small Temple, built for Queen Nefertari, marks the second time a ruler dedicated a temple to his wife (the first was built by Akenaten for Nefertiti). It was also the first time that the statue of the wife, Nefertari in this case, was carved the same size as the image of the Pharaoh himself, which is significant in revealing how Ramses II felt about his beloved queen. Usually, the wives’ statues never measured higher than the Pharaoh’s knees, but Nefertari’s statues was a full 10 meters (32 feet) high.

Nefertari’s temple is also aligned to the east. It is about 28 meters (92 feet) long by 12 meters (40 feet) high. The entrance is marked by six colossal figures. There are four figures of Ramses himself and two of Queen Nefertari. Along with the six colossi stand smaller statues that present Ramses’ and Nefertari’s children.

Just inside the entrance sits a large hall, supported by six pillars, each carved with the head of Hathor, as well as scenes showing the King and Queen making offerings to various other Egyptian gods. On the inner room’s back wall, reliefs show Nefertari being crowned by Isis and Hathor.

The interior of the Small Temple is not as complex as the Great Temple. At the end of the large hall there is a doorway, leading to another room decorated with scenes of Ramses II and Nefertari with various gods. Further rooms illustrate similar Egyptian scenes.

Over time, the temples stopped being used, eventually becoming covered by the dessert sand. By the 6th century BC, the Great Temple was already covered in sand up to the knees of the statues, and both temples were eventually forgotten until rediscovered in the early nineteenth century.

Abu Simbel was reportedly rediscovered in 1813 by a Swiss scholar, Johann Ludwig Burckhardt. History says that, as he was preparing to leave the area of Lake Nasser, by traveling down the Nile, Burckhardt came over the mountain and saw the front of the great temple, the rest of it having been buried in the sand up to the necks of the giant colossi. Burckhardt told his friend (Italian explorer Giovanni Belzoni) about the discovery, and Belzoni joined him at the site to help with the preliminary excavation. Despite all of their effort, the two were unable to dig out the entrance of the temple at that time.

Belzoni returned in 1817, with the English explorer and Egyptologist William John Bankes, and was able to reveal the entrance and to enter the base of the monument, taking every small item of value with him when he left.

Abu Simbel, however, was not the name given to the site during antiquity. Many believe that Abu Simbel was the name of a young local boy who had seen the buried temples through the shifting sands and guided Burckhardt to the site. Four years later, Belzoni excavated the area and named it after the boy who led Burckhardt. Unfortunately, whatever the ancient Egyptians named the complex has now been lost.

Abu Simbel was originally constructed just 280 km outside Aswan, on the western bank of Lake Nasser. In the 1960s, the Egyptian government decided to build the Aswan High Dam on the Nile River, and it was feared that this would result in flooding Lake Nasser to such levels that the temples of Abu Simbel would be submerged.

From 1964-1968, UNESCO set forth an initiative to move both the Great Temple and the Small Temple to a plateau on the cliffs. The temples were dismantled, moved 60 meters up the sandstone cliff that they originally stood on and were then reassembled. Great efforts were made to reconstruct the two temples in the exact, original orientation they had held to each other and the sun. They were even built into a man-made mountain to give the original impression of being cut into a rock cliff.

The Sun Festival is a biannual celebration that still takes place in Egypt today. It marks the highlight of the tourist season in Aswan. On February 22nd and October 22nd, when the sun illuminates the back wall, the statues there are washed in sunlight. Although the Great Temple is also dedicated to Ptah, god of the Underworld, Ptah remains appropriately hidden from the sun. The modern-day Sun Festival begins right before sunrise. Musicians and dancers are gathered to celebrate not just Ramses II and Nefertari, but of the remarkable technological and astronomical prowess exhibited by the ancient Egyptians.

Near the re-erected temples now stands a man-made dome, which houses an exhibit of photographs, detailing the entire relocation. Now one of Egypt’s most visited tourist attractions (complete with a sound and light show), this pair of temples have come to be called part of what is called the ‘Nubian Monuments’.

Thousands of tourists visit these temples daily, arriving by plane via a field constructed near the temples, and by guarded convoys that depart twice daily from the nearest city of Aswan. 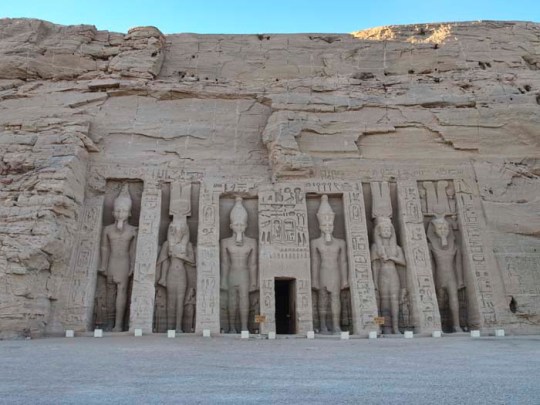 Abu Simbel is the location of two rock cut temples that Ramses II built in Nubia. The Great Temple was dedicated to Ramses II and several national gods. Images of Queen Nefertari and several of the royal children are on the temple. Scholars moved both temples, during the 1960s, to save them from flooding caused by the Aswan Dam.

The Hypostyle columns have tops carved in the shape of Hathor’s head. Two small vestibules were on either side of the main hall on the end by the sanctuary. The sanctuary was opposite the front entrance of the temple. All the carvings in the sanctuary were completed. Scholars found two areas on the wall for doorways to other chambers that were not carved.

Temple of Nefertari at Abu Simbel 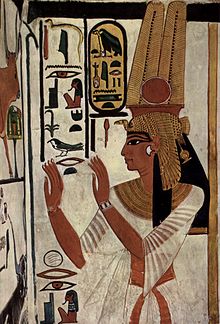 Her name, Nefertari Merytmut (meaning The Beautiful Companion, Beloved of Mut), embodied the majesty and stature of queen Nefertari. At the young age of 13 she married the 15 year old Ramses II, who would come to be famously known as Ramses the Great.

Nefertari was likely a noblewoman but not a member of the royal family. She uses the titles associated with a noblewoman but no titles calling herself a king’s daughters. Records say that Ramses II and Nefertari were married before he ascended the throne. Official records mention her from the first year of his reign.

Ramses II ruled Egypt for sixty-seven years and had seven different queens. The first of these was Queen Nefertari. Ramses II lived for over ninety years and fathered at least forty daughters and forty-five sons. Nefertari was the mother of at least four sons and two daughters. 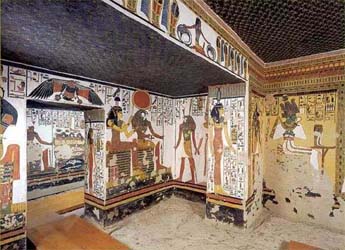 Personal Note: This Temple site is certainly one that makes a deep impression inside your Heart Center. It is of such beauty and elegance that melts a gentleness and determination to continue in what you are here for and what you wish for in the inner relationship of the Soul. This equality of honoring and respecting a balance of male and female vibrations within would certainly lead to Oneness where no competition or struggle would be needed in the outer world.

After we returned for a late lunch the boot cruised onwards to Esna for the evening.

Once again the clear star sky and the moon was a flow that followed me in dreams.