Archive for the ‘Storytelling’ Category

This is the story as Toto told it to me.

Many, many years ago, so long ago it is longer than I can remember, said Toto, when Buddha was one of the lower species, at the bottom rung of his journey towards enlightenment, Buddha was King of the Toads.

At that time the world was inhabited by all kinds of animals, humans and spirits; good spirits such as the ones that live in trees to protect them. The most selfish of all the creatures on Earth were, unsurprisingly, the humans. They were self-interested and had no respect for nature. They had little respect for the Gods as well. They ended up doing untold damage to their environment.

Paya Than, the God of Rain became very angry with the humans and decided to stop all rain on Earth for seven years, seven months and seven days. This is the foundation of the number seven being an unlucky number in Thailand. The people, being unaware that the lack of rain was the result of their own selfishness prayed to ask the spirits why there was no rain. By this stage the Buddha, as King of the Toads, had already developed some power through his meditation and was able to provide an answer to their prayer. He told the people the lack of rain was a punishment for the selfishness. This punishment brought upon the people on Earth also affected the innocent animals and spirits. That seemed so unfair. No one was more moved and angered by the unfairness of the punishment than Naga a powerful and fearsome serpent. Naga considered that Gods should be beyond anger and judgement and that the role of the God of Rain was to provide regular rain, not to punish everyone on Earth. Naga was full of his own power and decided, without consulting anyone, to go to Heaven to confront Paya Than, the God of Rain. He would battle with the God, bring him to submission and force him to do his duty and make it rain again.

Naga was no match for Paya Than and was soon thrown back to Earth badly beaten and close to death. Buddha took pity on the impetuous Naga and again using his special powers was able to heal Naga and give him a special, new shiny skin and a majestic horn on his head. From then on Naga vowed to always protect the Buddha. However, the problem of the lack of rain persisted and something had to be done. Buddha decided to consult all the creatures and spirits on Earth. They came up with a plan and this is what they did:

The termites built a termite mound so high that it reached the Heavens. Scorpions then climbed up secretly and crawled into Paya Tam’s clothes and stung him until he was so weak that the other creatures and spirits that followed could together overcome the God. Paya Than in shame asked to be killed. However, the creatures and spirits did not want to kill him, they wanted him to return the rain, The God therefore agreed, under duress, to make it rain again. The Earth and all the creatures in it were saved.

In appreciation of the return of rain the people on Earth established the Rocket Festival to precede the rainy season. In effect the rockets send praise to Paya Than who responds with rain, lots of rain. 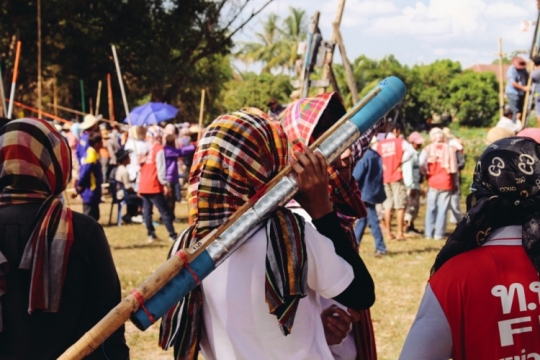 By this time Buddha had progressed on his enlightenment journey from being the King of the Toads to being the Prince Siddhartha. The King invited a seer to make predictions about the prince’s future. The seer concluded that the Prince would either rule all of the world’s seven continents or become a fully enlightened Buddha. The King had ambitions for the Prince to conquer the world but the Prince chose to continue on his path to enlightenment. 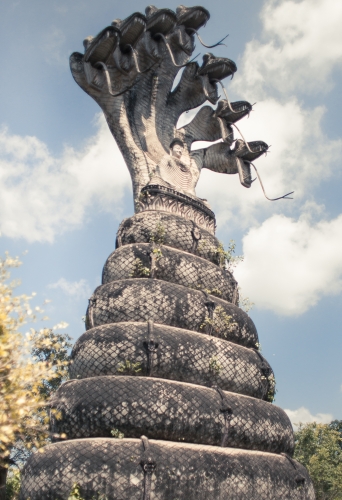 The Devil tried to deter the Prince from his chosen path by having his three evil daughters provoke him, tempting him to desire that which he had vowed to reject. The Prince, as Buddha, resisted. As a last attempt to steer the Buddha away from his journey to enlightenment the Devil attempted to wash him away with fierce rains and storms. This is where Naga returned to the story. Naga coiled his long and heavy body into a mighty tower. Buddha sat on top of the coil sheltered under Naga’s head. While Buddha was sheltered and unaffected the Queen of soil and earth used the flood to wash all evil away.

Naga wanted to follow Buddha and managed rise to being a man and then a monk but he still retained his quick anger. One day, in anger, he turned back into the form of a serpent and scared a group of monks. In sorrow for his weakness, Naga told Buddha he wanted to be a monk. In that way he would always be close to Buddha and protect him. However, Buddha refused the request and told Naga that he must first get rid of his basic desires such as anger and jealousy and his lowly serpent like ways. To do this Naga had to go back to the underworld to restart his journey towards enlightenment. Naga asked Buddha if he did this could his memory be part of the progress of Novices toward becoming Buddhist monks. This is the foundation of the practice of Novices going through the ‘Nag’, the preparation, when they wear white clothing for three days before entering the monastery. Naga accepted the challenge and returned to the underworld where he continues his quest for enlightenment. It is from this underworld, below the full and fast flowing Mekong River that Naga sends fireballs into the air every full moon in October. This is the Naga Fireball Festival, ‘Bang fai phaya nak’. It reminds Buddha that Naga is still there, still struggling. In this way Naga also thanks Buddha for his encouragement and praises him for his wisdom. 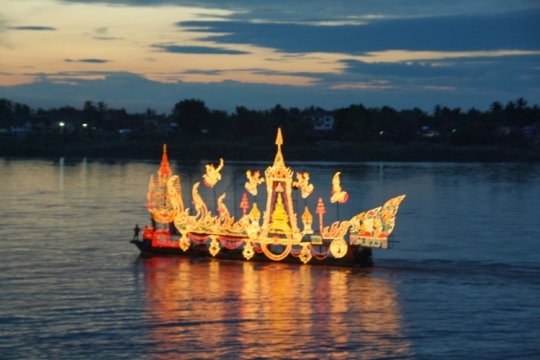